The Natural England Technical Information Note TIN147  http://publications.naturalengland.org.uk/publication/6626052 on MG5 is a fantastic summary of all things MG5 and much recommended reading.

I’ve been thinking about historical context on my latest blogs and the Note states that the plant community of unimproved neutral grassland (MG5) was thought to be an artefact of post-Neolithic (after approx. 2200 BC) farming, though if the Vera (2000) theory of prehistoric vegetation being more like parkland in places than closed woodland all over is correct, then neutral grassland types could be construed as being near natural vegetation (Peterken 2009).

Looking at the data within the Technical Note I think it’s possible to use the presence of some herbaceous indicator species to split up the MG5 community into two types: –

Both types still fit within the overall definition of Ancient Grassland (i.e. unimproved grassland since 1840).

The Note gives the following species as “probable indicators of long continuity of ‘traditional’ management (ie no phase of land use change such as ploughing and conversion to crops, woodland establishment etc).” 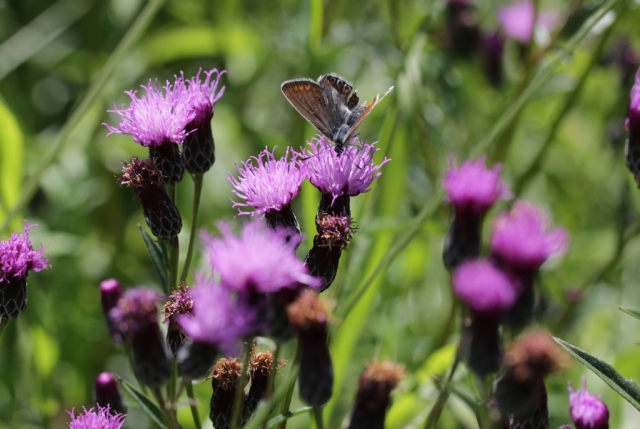 These species were present (along with the other species that typically make up the MG5 community; see below) in medieval communal grazing areas – the parish moors now called ox close or whinny hill where I live – or on sloping ground that was too steep to plough with oxen or horse. Now we can find them on the wide road verges adjacent to straight roads created through Parish common grazing land during Enclosure, especially if the verge is raised higher than the surrounding farmland or in some other way isolated from fertilizer runoff in the soil water. Otherwise remnants can be found are on the steeper lowland hillsides or small isolated fields.

You might wonder that some of these species can be present on ridge and furrow; an explanation for that could be that arable ridge and furrow may have been abandoned in the mid fourteenth Century (due to plague/Black Death reducing population numbers) at a time when the village sheep/cattle/horses would still have been grazing species-rich communal pasture/parish moors and would have been walked through the parish every day (from village to communal open pasture) and even folded/grazed on such abandoned arable land and therefore perhaps there was 200 to 300 years to transport seeds of these indicator species in their dung/hooves from the communal pastures. The daily movement of herbivores over long distances within a Parish is something that stopped with Enclosure. (In Long Newton cattle would walk about 4 miles (approx. 6 km) every day in order to get to the pasture from the village and back again).

Post-Enclosure communities are those examples of MG5 that reformed naturally on land that had been previously ploughed and I suspect that this most likely peaked when horse-keeping was at its maximum (I found a figure of 1,250,000 Farm horses in 1919 mentioned in a 1952 Spectator article). The species present would be of local genetic native stock and have seeds that I presume germinate more readily under the conditions than do the species mentioned above, or last longer in the soil.

The following, which are common species of MG5 communities.

And the characteristic grasses 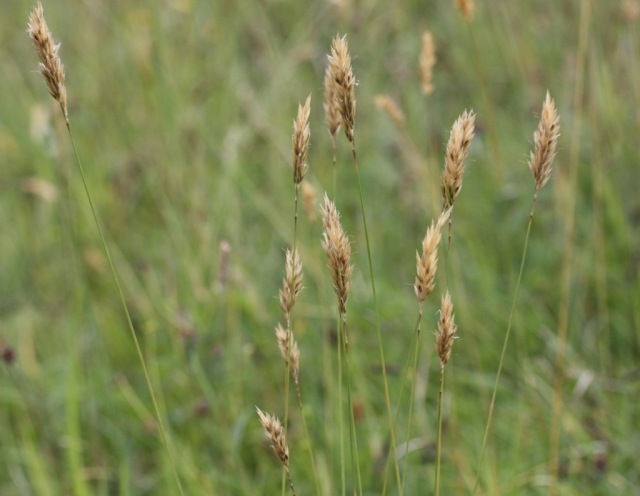 As to the difference between the two types of MG5: Enclosure resulted in the ploughing of most of the communal species-rich grazing pasture in which ‘near natural’ indicator plants will have grown. They may not have been that common before Enclosure, but they would certainly be much less common afterwards and so a drastic reduction in the amount of seed available to colonize new sites and also a far more restricted movement of grazing animals in which to move it (animals now moving purely within the farm rather than the whole parish) would most likely account for it. After Enclosure seed of native species was more likely to move purely within farm boundaries or in some areas from hay being made elsewhere being bought in to feed horses/cattle. It is interesting to note that horses refuse to eat meadow buttercup when it is growing or seeding (too acrid for them) and so grazing pasture with horses often has much buttercup. They will eat it as part of hay.

Post-Enclosure hay may have had a different species composition. In Medieval times almost all (lowland) hay was from flood-plain meadow (MG4) communities and though it seems after Enclosure it was from MG5 plant communities; the need for hay may have increased due to the increasingly long periods of time snow covered pasture in period termed the little Ice Age (circa 16th to the 19th Centuries) as well as the move from Oxen to Horses for farms hence the need for greater amounts of grassland set aside for it.

I haven’t tested this theory properly yet but thought I would write about it anyway as it seems intuitively correct to me. I’m sure there are exceptions, but it makes sense within planned countryside. I also wondered whether it would need three of the first list and not on ridge and furrow for it to be a plant community indicative of ‘near natural vegetation’; again don’t have any evidence for that, but just a thought.

There are also going to be differences depending on soil types, rainfall, and south/north etc but I think the above theory will still stand.

Enclosure is given without a date as it varied between individual parishes. In Long Newton it was 1659 but it continued until at least 1850: The book ‘Ecology and Enclosure’ by Shirley Wittering 2013 gives information on South Cambridgeshire 1798-1850.

Pignut is given a * as it can cope with occasional ploughing – there was an anecdotal account in my area from an old farmer of a small field being ploughed and potatoes grown for a few years during the war. The field is now covered with Pignut although none of the other species in the first list are present. Similarly, Pignut can avoid the worst of herbicide sprays if in summer dormancy when they are applied (incidentally, as can Bulbous Buttercup and I imagine so can Meadow Saxifrage and Wood Anemone).

The ** for Great Burnet is because even though it is a species associated with flood-plain meadows (MG4) it is found in MG5 communities in the north and is likely to be an indicator species, though the Technical Note does not include it.

Wood anemone is a curious addition to the list as we generally know it as a woodland wildflower. There is some evidence that wood pasture was part of the farming system in Medieval Yorkshire http://www.lowerwinskill.co.uk/meadows.htm ; I’m sure there are more scholarly examples too. The evidence I have for Medieval communal pasture in the Tees Valley is of scrubby (mainly gorse) grassland rather than wood pasture.

heatherkellyblog - travel with me and wonder at what you see!
The Old Man of Wytham
ArgyllGarden