We should talk of Ancient Grassland.

I’ve been thinking about how we describe ‘meadows’: Language changes over time and meanings shift depending on what most people see every day. A dictionary definition of a meadow is an area of grass that is cut to make hay; I might use the term meadow to make a more technical definition of wildflower-rich grassland (most often NVC communities MG5, MG4 and MG3) seem more palatable when giving a public talk; the ordinary person may praise the meadows being planted by the side of the road that look so pretty in the summer “you know, the ones with the lovely poppies” (which are in my reality hardy annual seed-mixes). As is often the case in English they are all correct, and within the Venn Diagram of ‘meadow’ are all these understandings; words mean whatever most people want them to mean. This being the case, what matters about the words we use to explain meadows of conservation and cultural importance is that the particular meaning intended by the explainer is clearly understood by the recipient of the explanation; preferably as quickly as is possible.

Perhaps we should talk of ancient grassland – ancient meadows and ancient grazing pastures – in the same way that we talk about ancient woodland habitat. Adding ‘ancient’ to the term grassland or meadow would allow us to convey something that would be easily understood by most people; it has been used before and is now something readily accepted. ‘Ancient’ used here would signify ‘native wildflowers and grasses that have been growing at a particular site for a long time and the site where they grow is of as much importance as a relic of a particular historic farming system as their biodiversity contribution’; they shouldn’t be seen as a moveable biodiversity unit. These plant communities are just as much a part of our heritage, telling us about our socio-economic cultural past, as are listed buildings and should be recognised as such. 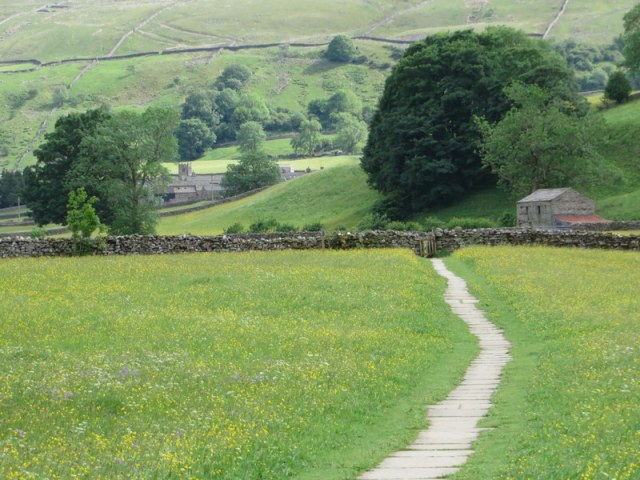 Back to the present day, and at the cutting edge of horticultural research, new grassland and new flowering plant communities (sometimes made up with species from many different countries) are being created for urban areas, ones that are appropriate and useful to the present time and our current socio-economic climate, and these surely will also be termed meadows. In farming and land management there is a growing interest in producing plant communities of high biodiversity value which are relevant to present management systems rather than recreating historic meadow plant communities. You can see that we need to clearly differentiate the various understandings of what a meadow means, both now and into the future.

Instead of trying to get people to understand that a hardy annual seed-mix with poppies is technically not a meadow, we in conservation should change our own terms slightly and talk of ancient meadows and ancient grazing pastures and create a much-needed Ancient Grassland Inventory* just like we have an Ancient Woodland Inventory and an inventory of our protected historic buildings.

*How difficult would it be to create an Ancient Grassland Inventory? As with everything, the answer is ‘it depends’. The Ancient Woodland Inventory started out as one-person tracing from old maps with a pen; it is still provisional, as far as I know, having never been comprehensively surveyed on the ground.

I think money would be available from the Heritage Lottery Fund for a five-year project to create an inventory (once created this could then be adopted by government) alongside public awareness raising/involvement and perhaps some PhDs. Are there specific indicator species for ancient meadows as there are for ancient woodland? or perhaps an investigation to see if individual species have a wider genetic diversity in older meadows than newer and is there a way of spotting that visually? Are ancient grasslands representative of natural vegetation for that area?

There are an obvious group of charities, working together with one as lead, who could undertake the work but charities have limited project capacity so such things are not always practical or timely. It may be more achievable as a series of smaller regional projects building up towards a whole? I’ve been involved in a small local Heritage Lottery project mapping semi-natural grassland in my area. Sadly, I think the recent cutbacks at Natural England would make it almost impossible for them to manage such a project, especially with the added burden of work that leaving the EU brings.

Notes: I’ve been thinking about writing this since a local conference in early 2016 (I’m slow) http://www.tvgreenplaces.co.uk/2016/04/21st-century-meadows-conference/  and I finally wrote up my ideas in early May this year after returning from a Floodplain Meadows conference in York.  I bought a book by Martin Hammond “Deep Meadows and Transparent Floods” in which he writes about historical references to the meadows we visited as part of the conference…starting in the 8th Century  https://rawcliffemeadows.wordpress.com/2017/05/11/deep-meadows-and-transparent-floods-the-story-of-the-ouse-ings/ . I also met Miles King and whilst we talked of other things, it occurred to me after writing the above blog that he might have written something on the subject…he did…in 2012 https://grasslandstrust.wordpress.com/2012/05/28/old-grasslands-need-an-equivalent-to-ancient-woodland-status/  Similarly the Wildlife Trusts have been calling for a national grassland Inventory, here in 2014 http://www.wildlifetrusts.org/grasslands and more recently Plantlife are running this project http://www.magnificentmeadows.org.uk/  and http://coronationmeadows.org.uk/ .

This entry was posted in Conservation. Bookmark the permalink.

2 Responses to We should talk of Ancient Grassland.

Travel with me and wonder at what you see - plants and mountains, for the most part!

The Old Man of Wytham
ArgyllGarden