How fast do wood anemones grow?

One of the delights of English woodland in spring are the vast sheets of wood anemone that you can see. And they do grow in vast expanses, don’t they?

Except my friend Barry found some in a very small local suburban wood, where they grew in obvious clonal patches… which looked kind of odd.

A wood is shown on this site in 1853 (checked on the First Ed. O.S. map), but it can’t have been there for that long before as there is ridge and furrow (a sign of medieval ploughing) present and it clearly forms a boundary for a local manor house built in 1824. 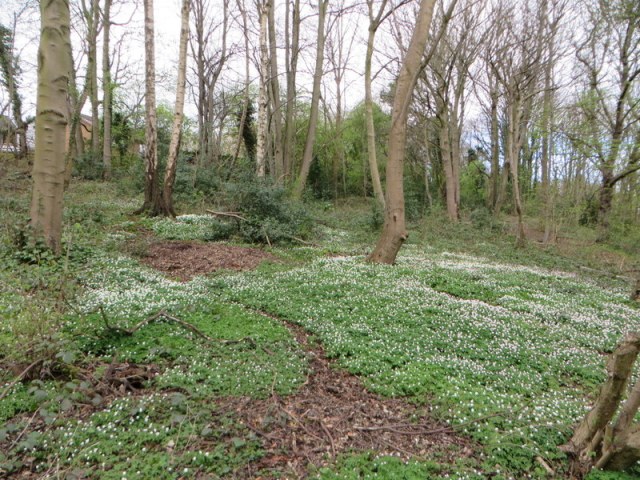 The clonal patches thing reminded me of a local wildlife site on a beck valley side nearby (100m away) where wood anemones grow in greater profusion but still in patches (some patches in the photo above have very few flowers, some lots of flowers, some more petals than others, some slightly later flowering), which I hadn’t really thought that much about before. There is a tarmac path at the top of the slope, before the back gardens of the houses start, that runs along the length of the wood until meeting a road.

This patch was easy to see because of the pinkish tinge to the petals.

Further up the valley site they are in big expanses (on the right of the stream only – not on the left hand side at all) but it’s not as easy to see from the photograph because I was a bit early in the year (yes that is a shopping trolly in the middle – suburban innit?).

In local ancient woodland the clonal patches are not obvious and the plants form a continuous carpet (yes that is all wood anemone – on a sunny day it would be whiter with the flowers showing more as they open wider in the sun). 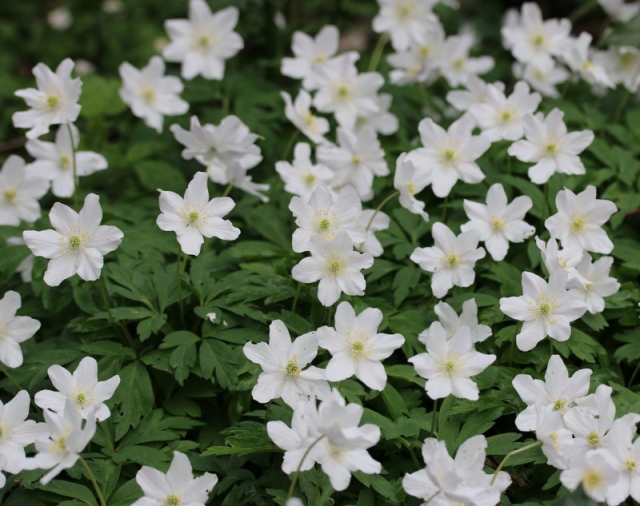 And so I wondered why, as you do.  It turns out that there are a surprising number of scientific papers on wood anemone on the internet, although most of us (me included) are restricted to reading the abstract. In the abstract of ‘Rhizome Growth and Clone Development in Anemone nemorosa L.’* by DEIRDRE A. SHIRREFFS & ADRIAN D. BELL (in Ann Bot (1984) 54 (3): 315-324.) it says “individual rhizomes elongate by an average of 2.5 cm per year” although not necessarily in a straight line year on year. So roughly speaking we can imagine a single seed germinating and growing outwards to give a maximum of 75cm growth from a single point in 30 years. The whole clonal patch would be twice that, as it would grow both sides of the germination point, so about 150cm in width. This was roughly the diameter of the bigger patches in the wood. Now the speed at which plants grow depends on how suited it is to the growing conditions, so let us just use that 150cm wide for a patch in 30 years to see where it gets us. 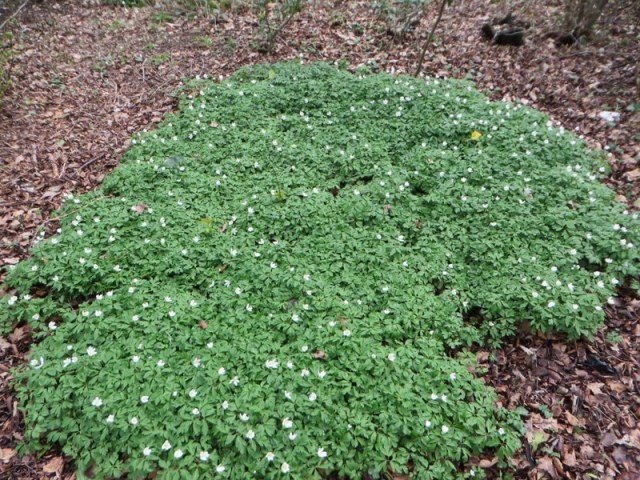 A clonal patch that is probably not flowering much because there are some low tree branches just above it. Wood anemones flower much better when they get more light, for example in the years shortly after a wood has been coppiced and before the canopy closes overhead again.

So what happened roughly 30 years ago that may have increased the number of suitable micro-sites required for germination? What about dutch elm disease? Sure enough there are young wych elm trees in the wood and the remains of the rotting tree trunks of the dead elms.

When the original trees died there would have been much more light reaching the wood floor – was this the point when those seeds germinated and the wood anemones started to colonize the wood?

But then how do the seeds get there in the first place? Wood anemone seeds have a small area of fatty tissue that entices ants to collect the seed to feed the fatty tissue to their larvae – the discarded seed then germinating near the ant nest. I didn’t look for ants. However, they also have a small hook at one end of the seed that could easily attach onto animal hair and be transported. In the mid-1980’s houses were built adjacent to the wood. With houses come dog owners and dogs go for walks and get all sorts of seed mixed up in their hair. 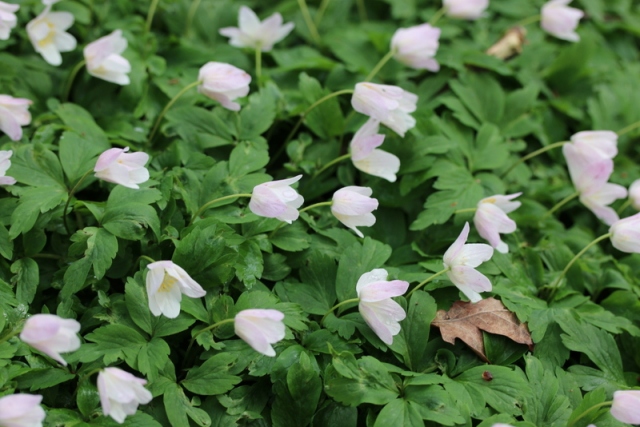 It’s fun to speculate and set up a hypothesis – it’s another thing entirely to test it: But it is interesting to think about, and by thinking about it you start to look for clonal patches of wood anemone when you visit a wood…and then start to wonder how long the wood anemones have been growing there…

*Their study also used computer modelling and measurement of 27 morphological characters to determine that in ancient woodland a continuous stretch of wood anemone will be made up of several different clones, as the clones intermingle (imagine patches growing into each other and continually mixing) the longer they have been growing there. Wood anemones are one of the wildflowers used as an ancient woodland indicator and so when present in large sheets you can see they must have been continuously growing there for hundreds of years.

I rarely see seedlings in the wild, though have found wood anemone to germinate readily from fresh seed sown in the nursery.  I suspect it would be difficult to differentiate a seedling from a small clonal rhizome that hadn’t flowered, especially when just casually walking through the wood which may account for not seeing many seedlings when visiting woods.

3 Responses to How fast do wood anemones grow?

heatherkellyblog - travel with me and wonder at what you see!
The Old Man of Wytham
ArgyllGarden